Skip to content
HomeWhy government won’t support homesteading: an opinion
Our society used to be mostly agricultural. It revolved around the nuclear and extended family, a close-knit community where people usually lived their whole lives, the family farm, the village, the artisan tool-maker, and everything small-scale and personal. For better or worse, the Industrial Revolution put an end to that kind of life and propelled us to a world where manual work is scoffed at, and agriculture is seen as something menial or boring.
Yet this did nothing to change our nature. As living beings, we were made to interact with other living beings. It is good and healthy for us to tread earth, smell flowers, pick fruit off trees, take care of animals, and make occasional escapes into wilderness. People who live in small apartments in big cities can find an outlet for this healthy instinct by growing plants in pots, keeping an aquarium and a cat, and venturing out to the country from time to time. The words “farm”, “country”, “rural”, “pastoral”, “village” still bring up pleasant nostalgic associations (compare them with the associations you get when you hear the words “factory”, “industry”, “rush hour”, “traffic” or “highway”), and some people even find out that they are inherently incapable of living the city life anymore, and drop their perfectly good jobs in order to cultivate a piece of rural land, such as in Marcel Pagnol’s splendid novel Jean de Florette.
We still yearn for the simple, cyclic, gentle and healthy rhythm which can be found in nature, the earth, and the seasons. 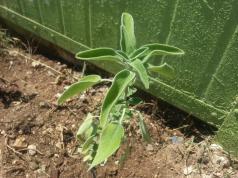 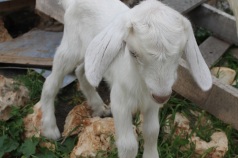 Some time ago, I picked up the Israeli Shabbat leaflet “Olam Katan” (“Small World”) and was genuinely interested by an article which suggested that modern technology and means of transportation make small-scale farming/homesteading possible even for people who don’t want to, or can’t make this their main source of livelihood. It is entirely possible, the author argued, for a family where both spouses hold a regular job to also keep a small homestead on, say, on 1 square km of land. Such a homestead can include a barn with 3-4 dairy goats and a dozen chickens, a small vegetable garden, and some fruit trees. Furthermore, it was argued that Israel has enough unexploited land which is suitable for agriculture. Such land, according to the author, could be divided into small homestead plots and handed out or sold inexpensively to anyone who would like to start a homestead or a sustainable small-scale farm. Thus many more people can live a healthier, closer-to-nature life, while also creating a strategical advantage for Israel by preventing Bedouin clans from illegally taking over empty lands.
While I would like, and am ready, to believe that a small-scale farming/homesteading revolution is possible, I also think the only way for it to happen is by individual people making the change in their private lives. I don’t think it will ever be encouraged or supported by the government, for many reasons. Here are just a few:
1. The government will never, not in a million years, hand out land or sell it cheaply (if it did, I’d be the first to stand in line!) – it will reap big bucks by selling land to big contractors, who in their turn will reap their big bucks by erecting tall buildings with cramped over-priced apartments.
2. Small-scale farming/homesteading will never be encouraged on a government level because commercial-scale farmers hold too much power.
3. A family living on a homestead will very likely have a rewarding, satisfying life; the more they grow, the less they will buy, not only in the way of food, but also in other areas. Shopping will no longer be needed as a recreation. They will move away from the temptation of big stores and shopping centers. In the evening, they will hurry home to milk their goats and water their tomatoes. Such people, for psychological and logistic reasons, are more likely to buy only what they need, which means the government will lose money by way of taxes each of us automatically pays when we buy in a licensed store. People who succeed in their little homestead venture might also discover they like it so much they will possibly opt for a less demanding, lower-paying job and enjoy a more relaxed lifestyle – and then the government will lose money by way of income tax. Some economical guru up there is bound to figure it out, and the government will never – not in a million years – agree to lose money, even for the sake of promoting a healthier and happier society.
4. A homesteading/small scale farming network will encourage the development of a local, sustainable market based on barter and small unregistered sales – the government won’t want this to happen because this will, again, mean less taxes.
However, it is a joy for me to know that other people, like me, indulge themselves in dreams of a world where families work together, more food is produced locally, and giant chain stores are cheated of part of their profit because people realize they don’t need so much stuff.

22 thoughts on “Why government won’t support homesteading: an opinion”