Latest Mother Earth News post is up, this time talking about chick season, which is not as far as it may currently seem:

“Though it may be hard to believe, spring is coming, and chick season with it. If you have never hatched your own chicks before, you might want to give it a go this year.”

Above: a picture of one of our broodies with her chicks from a couple of years ago.

Some would say, and rationally they would probably be right, that the owner of a little urban flock doesn’t need to hatch chicks at all. It’s time consuming and messy, there are countless hurdles a chick faces on its way to adulthood, and some of the young birds will inevitably be lost at some point.

It’s easier and more convenient to just keep 3-4 hens for eggs and buy point of lay pullets every couple of years to replace the aging flock. It would probably be cheaper in the long run, too. But nothing compares to the magic of another “surprise egg” cracking and letting out a fluffy new chick. The way the children’s eyes light up when they see it, too – it’s so beautiful every single time. ♥

So here’s to full incubators, busy broodies, and a spring and summer full of fluffy peeping chicks. 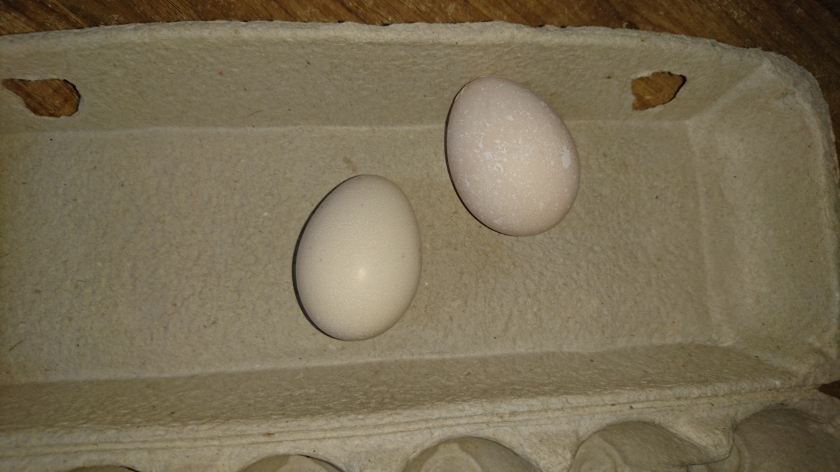 Yesterday spring was really in the air. We found the first surprise eggs from our pullets in odd corners – you can imagine the thrill (I don’t have a store bought egg to place side by side for comparison, but they are about 2/3 as large and a 100 times tastier).

I made the nesting boxes all comfy and cozy and placed dummy eggs inside.

I planted peas and sweet peas.

I put the yard in order a bit after the recent winds and rain and being unable to poke my nose out. It was great.

Now today we have more rains, a chilling wind, lots of mud, and I’ve caught whatever bug that has been making its way among the kids. Again.

But that’s OK too, as long as I have the comfort of my warm bed, books, yarn, and hot chocolate.

It has been a while since I’ve last written for Mother Earth News, but here is my latest post about the predators we are still dealing with, despite having moved to a different area:

“When we moved from out in the boonies to a small town and started our new little flock of urban chickens, I thought we’d have an easier life where predators were concerned. Foxes, the bane of our chicken’s existence for years, were left behind, as were hawks and owls.”

Meanwhile, we are still in floods of rain, with my poor little garden quite floated and us cooped up inside – comfortably enough, thankfully, with lots of cozy snuggle-and-read time, crafts, and tea.

Almost a year after moving here, we have taken the next step towards making this house feel like home: building a chicken coop!

We’ve still got many improvements to make on it, namely a real door, a roost, and in time some nesting boxes, but overall I think it really shows my husband’s carpentry skills.

And the really cool part? We’ve used almost entirely scrap wood, and about the only thing we had to buy was the wire netting.

Some of the chicks enjoying their new abode. They were SO ready to move outside from the brooder.

After almost a year of chicken hiatus, we’ve finally taken the plunge again. We got some eggs from a generous friend, dusted off the incubator, and three weeks later…

Now these little ones need a proper residence. I know, I know – we’ve got the it all backwards again, but at least now my husband will have the motivation to build a coop. I look forward to seeing what he comes up with.

As cute and fuzzy as baby chicks are, and you can be sure they’re a huge hit around here, what I really look forward to is an established coop with a flock of adult hens, a rooster or two, and fresh eggs every day. 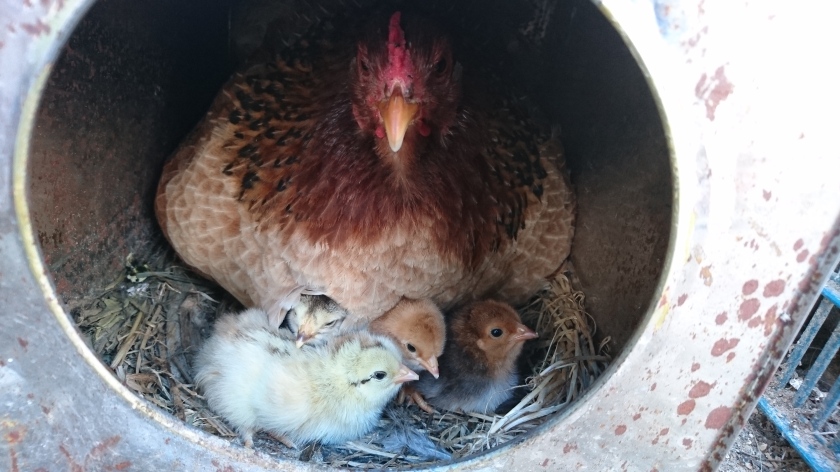 The little hen in the photo above is my champion broody. It seems that she only ever lays a batch of eggs with the view of sitting to hatch some chicks, and she takes care of her brood for many months, keeping them under her wing until they are almost fully grown. Here you see her with part of her latest brood – six multicolored chicks from an assortment of eggs.

Not all is calm and peaceful in the chicken kingdom, however. Today at 4 A.M. we had a visit from an especially cunning fox who managed to dig under the coop and carry off another one of our hens. Foxes are about the meanest and sneakiest enemy a chicken owner can have – once they have set an eye on your coop, they will keep visiting with amazing persistence until they pick off all your chickens one by one… or learn that free meals are not to be had around your place. That’s why, even if a chicken is already killed, you should do your best to stop a fox from carrying it off – once they get one prize, odds are much higher that they will keep coming back for more.

I spent part of the morning reinforcing the coop, and will probably keep mama hen and her chicks inside overnight.

As difficult as it is for me to understand, some people actually have an aversion to chickens. If these people happen to be your neighbors, while you are a poultry lover, it has the potential to create some very unpleasant clashes, in particular over one issue – the crow of a rooster.

It can seem very unfair, especially if your neighbors have a noisy dog, a habit of loud music or smoking, or give you a headache by using their lawnmower every other day – but the fact is, they have the upper hand, because once local authorities hear the scary word “livestock”, your poor little chickens might be the target of an eviction order.

Read on how to evade these unpleasant situations in my latest MEN post:

“My last suggestion is broader and less technical; try to cultivate a closer and friendlier relationship with your neighbors. Give them a few fresh eggs when you can, invite their children to feed your chickens or see baby chicks when you have them. Usually, after people have been your guests, tasted your home-grown omelet, and played with your cute fluffy newly-hatched chicks, they are unlikely to complain over something that isn’t absolutely disruptive.”