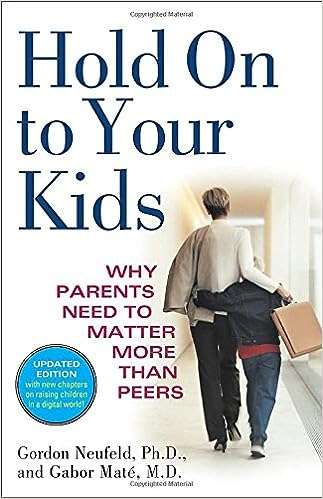 Hold On To Your Kids: Why Parents Need To Matter More Than Peers is a book with an important message (the headline itself, I think, speaks volumes!).

“The overarching theme of the book is ATTACHMENT. To whom are your children more attached? Are they attached to you, their parents, and other adults? Or are they attached to their peers? To whom do they look for guidance? Whose star have they hitched their little wagons to?”

“My son is so independent,” a neighbor proudly told me once, “he has so many friends! As soon as he gets back home, after lunch, his friends come to visit him or he visits them, and he plays together with them until it’s time for supper. He hardly needs me at all!” Want to guess how old the boy was? Only 4. And the situation described above was seen by his mother as something most natural and desirable.

There is a perspective of my own I would like to add: while the authors of the book admit that attachment between parents and children, especially young children, is vitally important, and that early enrollment in daycare and preschool is more likely to make children peer-oriented (that is, dependent upon their friends in the development of social connections, goals, values, morals, language and habits), they also say that the most obvious (and, they confess, most desirable) solution – that of young children staying at home, usually with their mothers, is in most cases an impractical, outdated measure.

Their suggested solution is creating an attachment between the child and the “parent substitute” – babysitter, daycare worker, teacher, etc. While, of course, an invested and caring daycare worker is better than a detached, unaware one, I do not think a parent-child-like connection between the child and the care provider is possible or even healthy. There are too many children per caretaker and, above all, nobody can love your child like you do. Also, there is absolutely no guarantee the caretaker/teacher passes on values and messages you approve.

I vividly remember a 3-year-old niece who kept talking to us about her preschool teacher, whose name was Ruthie. That child was evidently engrossed by Ruthie and talked about her a lot more often than she mentioned her parents. Perhaps it is better that the child was so connected to her teacher, rather than her peers, but the fact remains that Ruthie (however capable of creating the attachment) did not care about the child in the same way. It was not her child, after all. At the end of the year, the child and her teacher would part, never to meet again. Is it really good for a child to give her heart to a teacher in such a way, when we know it is to be only a temporary relationship?

Even grandparents, aunts and uncles (the relationship with whom is permanent) are not supposed to be more than auxiliary figures in child-rearing. They can provide help, plenty of help, but the biggest chunk of the job of child-rearing (in time as well as authority) should belong to the parents.

Rather than say it’s impractical for young children to remain under the care of their mothers, it is better to stress the importance of such a measure, and to encourage families to stick to it as much as possible. You know how it works: when you are convinced something is truly important, and that there is really no equally good substitute, you will move mountains to make it happen. Of course, for some parents it will not be possible to keep their child at home, and then damage-minimizing tactics, as described in this book, are in order.

While I do not think mothers at home should be directly funded by the government, I do believe that  significant tax reduction for fathers in single-income families would be a fair measure. Let people keep a larger share of their own fairly earned money and provide for their family. It would ultimately save the government a lot of money on all sorts of programs that fight violence, bullying in schools, teen pregnancy and drug abuse, and other ailments of our society.
Advertisement

2 thoughts on “Hold On to Your Kids: book review”